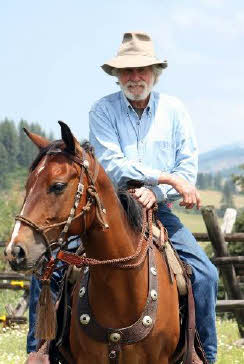 Larry Difani, born and raised in Portland, Oregon, was affiliated with Arthur Murray Dance Studios in the late 1950s and 1960's. He met his wife, Donna, in San Francisco in 1970, where he specialized in land development and investments. They married in 1972, and lived in Marina del Rey, California, prior to moving to their peach ranch in Turlock, California, in 1974, where Larry co-founded TEDI Farms, a farm management company. He and Donna were co- op members of the Cal Can Peach Association followed by Tri Valley Canners and Growers.

He acquired his Commercial Real Estate Brokers license around 1993 and joined in partnership to form Pinnacle Realty and Pinnacle Development, building custom and subdivision homes in Turlock, California.

Larry became a member of Backcountry Horsemen of California in the late 1980's, serving as BCHC State Education Chair for five years. The Officers' Training Manual was created. Larry co-founded the BCHC Mid Valley unit, serving as two-term president, 1995-1996, during which time he was chairman of the BCHC 1995 Rendezvous in Turlock. He was also instrumental in organizing the first BCHC team (from Mid Valley) to compete at Bishop Mule Days. In 1999, Larry served as BCHC State By-Laws Committee Chairman. He was a recipient of the Ben York Trail Blazer award.

As BCHC State Education Chair, he partnered with the USDA Forest Service, National Park Service and Bureau of Land Management to organize the Wilderness Riders, a program designed to educate stock users in the preservation and "Gentle Use" of the wilderness lands.

An advocate for the rights of stock users' access and enjoyment of the high country, he represented BCHC in the US Forest Service Emigrant Wilderness Planning effort in the mid 90's. He strongly believed in keeping within the "sideboards" of the Wilderness Act of 1964 set forth by Congress "for the American people." As he put it, "Not some of the American people or certain groups of the American people, but all American people - even people who ride horses and pack mules." He was a NOLS (National Outdoor Leadership School) Master of Leave No Trace.

In 2000, after farming peaches for 25 years, he and Donna semi-retired to Clearwater, Idaho, where they established Difani's Backcountry Mfg Co., makers of high- quality pack equipment and products for mules and horses. Larry's custom designed, hand-constructed leather products, including his pack bags and pack saddles, are in use today by recreational packers, the U.S. Forest Service, U.S. Park Service, the Grand Canyon, the U.S. Army and customers around the world.

His optimistic and upbeat attitude was energizing and motivating. He loved life, hard work, his family and country, packing into the wilderness and, as Ruthie Heuer put it, "could make any woman look elegant while dancing the waltz."

His friends at Backcountry Horsemen of California were very special to Larry. When he told a story about any one of them, there was always a smile on his face and a sparkle in his eye. He always retained his great sense of humor!