John Marshall, Bob Cooper, Julie Perry and Carl Perry cleared logs from the Coyote Trailhead on August 6th and 7th, 2018, despite the Donnell fire.
All photos courtesy of Carl Perry.
You may jump to the newsletter article below the pictures. 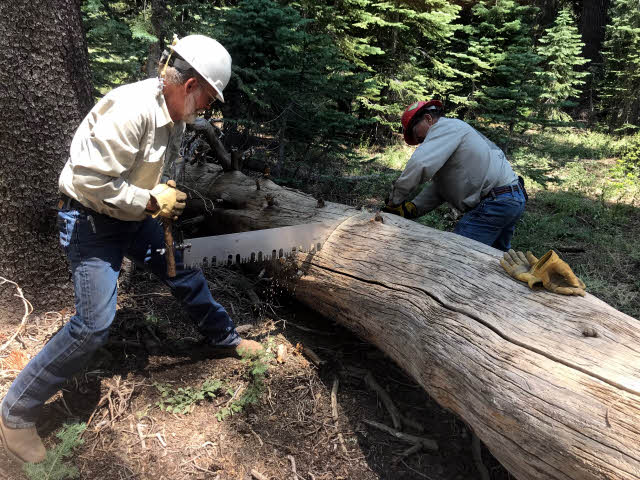 02) John Marshall and Carl Perry use a crosscut saw to remove a fallen tree.

This is the end of the pictures. You may read the newsletter article, below, go to the main Activities page, or Home.

The Coyote Trailhead work crew was pretty much scared off because of the Donnell wildfire. I myself had reservations and almost called it off but my deciding factor was that Bob Cooper really wanted to go. John Marshall, Bob Cooper, Julie and myself were the fearsome four that stuck it out. The four of us cleared about 8 trees the first day with the last tree being the biggest and most difficult. We were pretty deep into the trail and the smoke was billowing over Eagle Mountain. We were right on the other side and had one eye on the pass as we knew the wildfire was heading our way. It was pretty scary and we were glad to get the last log off the trail. After removing that log we rode to the Cooper Cabin as Bob wanted to see the historical site. He was amazed at the condition of the buildings and took plenty of pictures. About 4 o'clock we mounted up and made some fast tracks to camp. We were wondering if there would be a note on our pickups to evacuate when we returned. There were no notes anywhere so we planned for another day.

The next day we cleared three 24-inch trees that we had passed by the first day. We ate lunch after the first two logs. All three of them had to be grip hoisted off the trail. The third tree just about finished us off as only John and I sawed. Bob and Julie were setting up the grip hoist so that we didn't waste any time. Little did they know that John and I were running out of gas on that last tree and there was no hurry. The total was about 11 trees and all of them were sawed by the cross cut saw. It was slow going you might say but we got it done.

[Ed. Note: We have to use a cross-cut saw because chain saws are not allowed in wilderness areas. A "grip hoist" is a heavy-duty come-along, a toll with winches and levers that lets ordinary people move things that weigh up to four tons.]