Our team won the Mule Packing Competition at the annual Mule Days fair and exhibition in Bishop, California over the Memorial Day weekend this year.
All photos courtesy of Carl Perry.
You may jump to the newsletter article below the pictures. 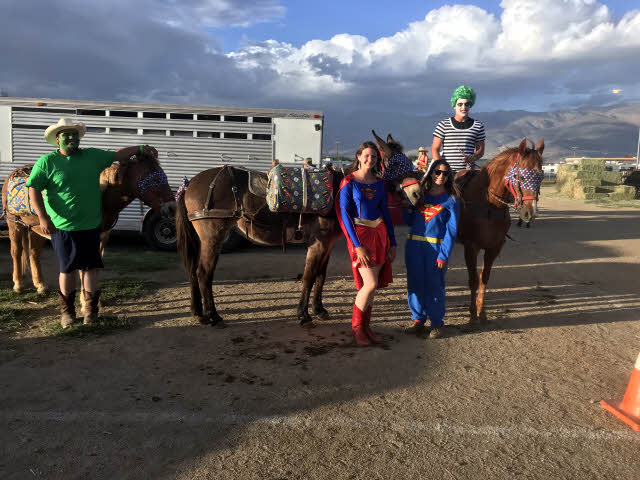 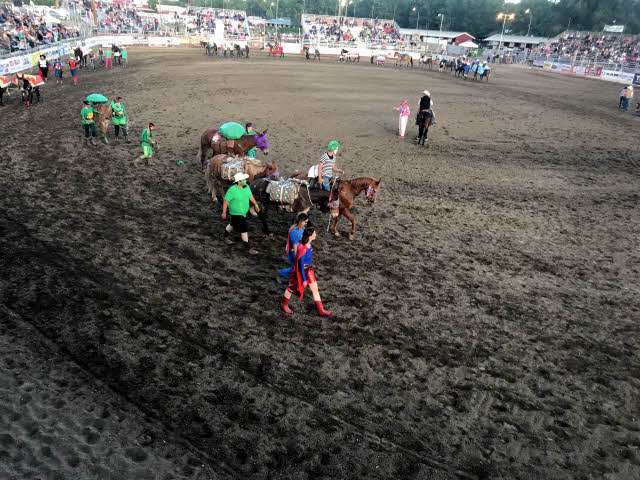 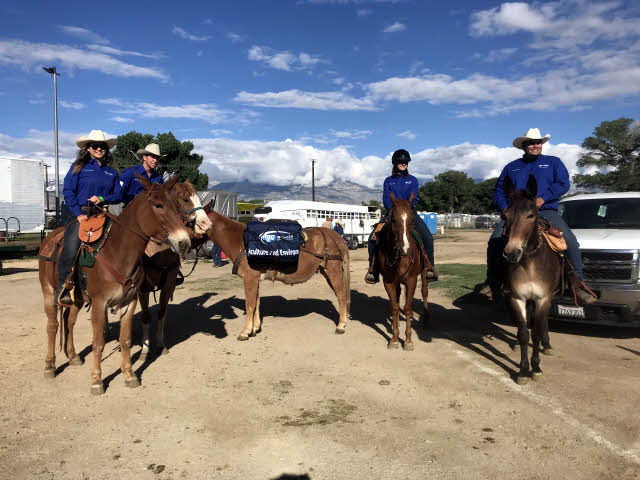 03) The team in their MJC Uniforms 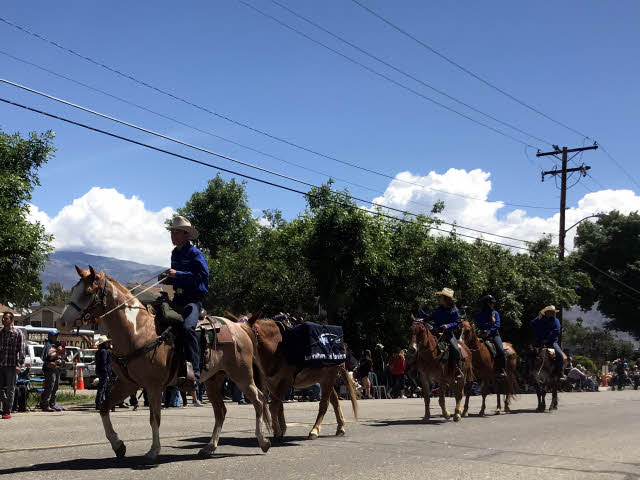 04) The team in the parade through downtown Bishop 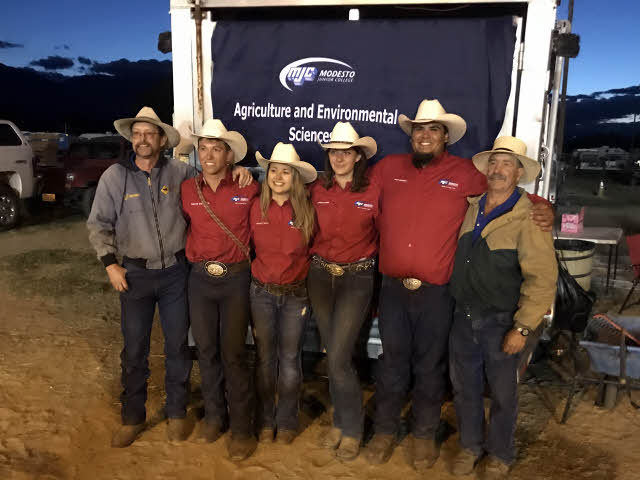 05) The team and their BCHC Coaches 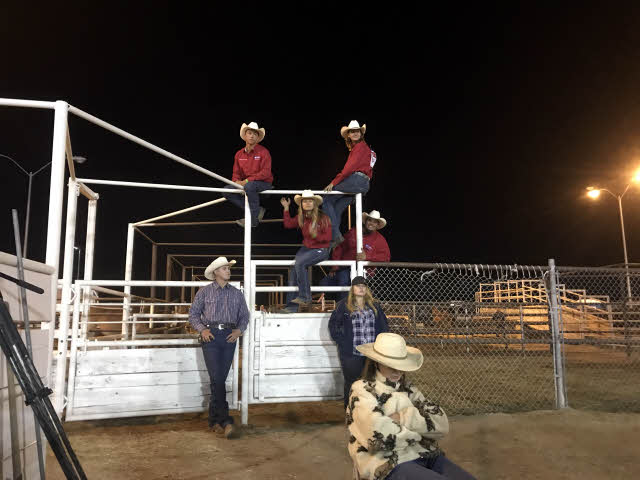 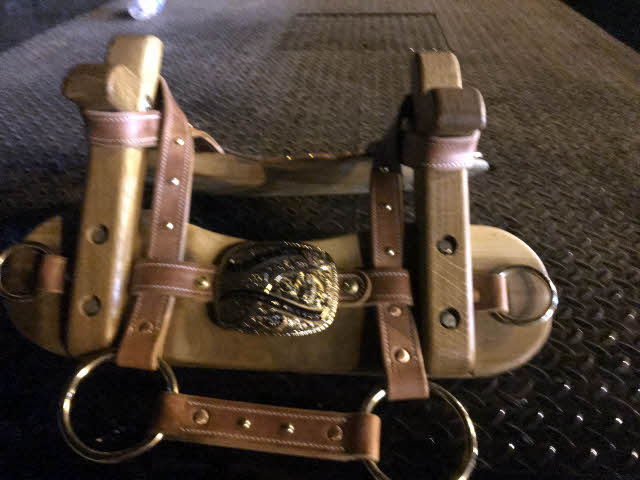 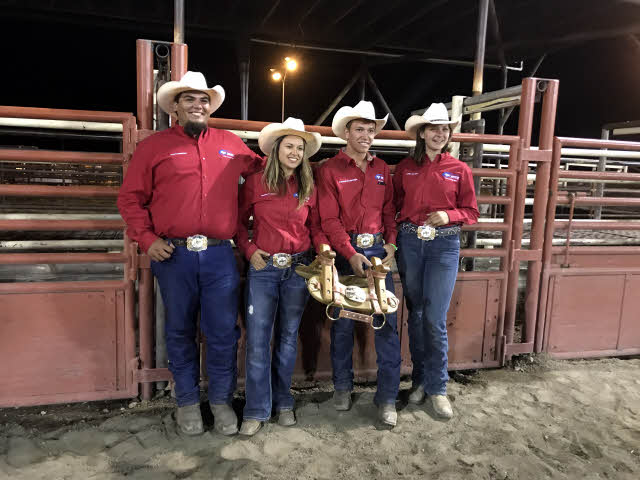 08) The team with their trophy 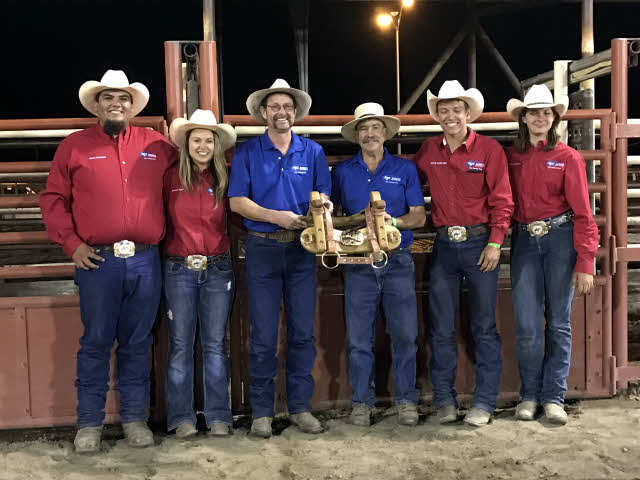 09) The team with their trophy AND their coaches

This is the end of the pictures. You may read the newsletter article, below, go to the main Activities page, or Home.

Once again the MJC College recruited a mule packing team to compete at the 2018 Mule Days Show. We actually had two boys on the team this year. One of which had never packed a mule before. Our team participants consisted of Barbara Baglioni, Kaitlynn Rumsey, Garrett Dollarhide and Jared Campbell. The levels of experience were from nothing to a world champion junior packer.

Our practices were the worst ever. With all the activities going on, trying to get four students together on the same day seemed impossible. I was so frustrated until the Sunday before we left to go to Bishop. Doug , Kathy, Dave, Julie and I were ready for a real practice. I demanded that all the kids be present so that team work could come into play at Bishop. We practiced for two hours and packed the mules with at least ten different loads and two scrambles. We had a pack off to determine our two best packers for the relay at Bishop. At the end of the day they were ready for competition.

The first competition at Bishop Mule Days was the scramble. This year to make everything fair the students just unloaded all the equipment and placed it on the ground. There were no chasing animals around the arena. When the buzzer sounded the race was on. Stuff was flying everywhere. In less than 2 and a half minutes Garrett flew by the finish line. We waited for the Judge to check the load to make sure it was clean and it was. We joyously jumped up and down.

Now the students were starting to believe in themselves. They were up on top with twenty points. The next competition was the relay. This is where all students have to run and two of them have to tie the box hitch on while they are trying to grasp for air. We were always trying to be fast as usually fast wins. The Intercollegiate committee decided that they were going to enforce AMA (American Mule Association) rules. We did not check our loads before jetting back to the finish line and a penalty was called on us. We were first across the line but ended up in fourth place. Bummer! Now we were sitting in 1st place by only two points and that was ok. The penalty rattled our kids up a bit but they said that they could get the points back on the next competition.

Sunday afternoon was the pack and load event. There was a lot of confusion of what the committee wanted us to do. We were trying to understand if they wanted to use manties or not. They said if the load needs to be mantied such as duffle bags then cover them. We thought we had it all figured out. The team loaded the two loads with lightning speed. Garrett crossed the finish line first again but I saw a judge pointing at the load. This was not good. The mantie was not completely covering the load. It looked like we were to be penalized again. As we waited for the results, loads were being scattered all over the arena from the other teams. It was really hard to keep track of who crossed the finish line with clean loads. The results came out just before the evening show. It was said that four teams were clean so we placed fifth. Now the kids were down on themselves. Just before the final event there was another discrepancy on another team and we moved to fourth.

Before the final event we were sitting in second position with two points behind the leader Cal Poly. We knew that those kids have been practicing for two months and they were the same team that had competed last year. It's hard to beat experience but we were going to do our best. We had a little meeting just before the finals on how to stay calm, be precise with our knots and double check everything before blasting off to the finish line. We made a plan and were ready for the win. At the last minute and literally a minute before they went in I went down to the area to check on the girls. Kaitlynn said to me, Carl don't worry it's only a practice. Talk about having butterflies. When I ran up to the stands they were already going in the arena.

It was all in their hands now. The teams lined up across the arena. The loads were two 4" pipes, garbage can, ice chest and a tub. The music was blaring, the announcers voice was ear piercing and Kaitlynn was trying to keep Captain calm while our other team members were figuring out their strategy, I could see the tension in all the kids. They were shaking their arms doing squats in place and jumping on their toes. This had to be a win for the team to just tie the score if Cal Poly would place second. Then we would have to see what the committee decides. The buzzer finally sounded and it looked like bees swarming my mules. There was no hesitation in their strides and all 4 team members were diligently tying the perfect packer box hitch. In less than two minutes Garrett bolted across the finish line with Cal Poly right behind them. The load had no penalties so we clearly won the final and would tie Cal Poly for the Championship.

Now the waiting began to see who would be crowned World Champions. Finally the announcement came that Cal Poly was the world champions. We were still very happy that we had won reserve champion and silver belt buckles. We were still rejoicing about our accomplishment when Bob Tallman spoke loudly that there had been a mistake about the intercollegiate results. He said some would cry and some would be very happy. The decision of the committee to determine who the world champions were to be was determined by what team won the most events. All ears were listening intensively to the announcement as Bob named the four winners as Barbara, Kaitlynn, Garrett and Jared. Holy smoke, we actually won!! The rejoicing started all over again but with greater enthusiasm. We want to thank Doug and Kathy Dollarhide for allowing us to use their facility for practicing and helping coach the team and the Mid Valley Unit for sponsoring this team.