We cleared over 100 trees from the trail to Coffin Hollow.
Photos courtesy of Carl Perry and Cathy Dollarhide.
You may jump to the newsletter article below the pictures.

01) Rinding in to the work site 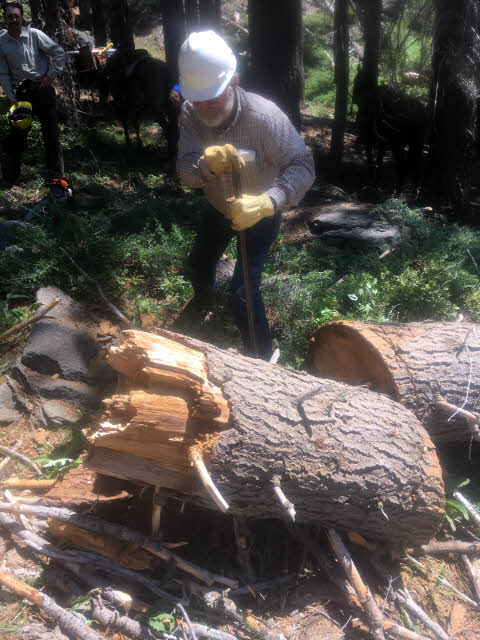 04) John Marshall using a pry bar to move a log out of the way. 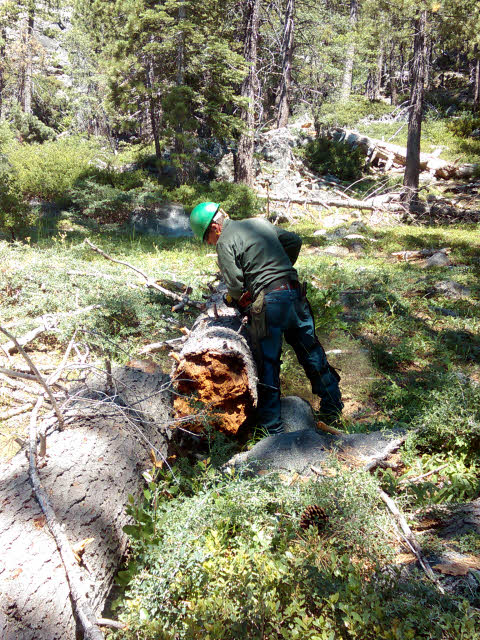 This is all of the of pictures. You may read the newsletter article, below, go to the main Activities page, or Home.

July 21-24 was a trail clearing of the Coffin Hollow area. Carl and Julie Perry, John Marshall, Vickie Morales, Doug and Cathy Dollarhide, Gary Ford and new member Anthony Johnson were the workers of this particular clearing. There were many trees cut and a lot of brush pruned. The largest tree cut was 30 inches in diameter. The work had to be done early in the morning because it got to be 90 degrees during the day. We were usually back in camp by 2 and able to take it easy until dinner. Carl and Julie provided the food which included sausages, fried potatoes, ribs, corn, buttered garlic bread and of course a dutch oven dessert. The trail is nice with a variety of terrain and beautiful purple lupins were in bloom.

Because of the work done you now can ride a loop trail - Coffin Hollow to Box Springs to Mud Lake. Getting to Coffin Hollow is approximately 2 hours from Crabtree.

The previous weekend there was a Recon group that went out to scout this area. They had to cut at least 50 trees in order to get close to coffin hollow. At the trailhead the group met a fellow and his son who later became members (Anthony Johnson and son). Those that were on the Recon crew were, Carl and Julie Perry, John Marshall, Katherine Reeves, Karen Barandelli, and Anthony and son. Total of trees cleared in the 2 weekends was over 100! Yikes, great job everyone.