We taught a number of young people basic packing and LNT (Leave No Trace) skills at the 2013 Youth Horse Camp June 28 - 30 at the Kerrick Corrals (near Aspen Meadows Pack Station, just off of Crabtree Road, in Stanislaus National Forest).
We'd give a lesson, let them swim, give another lesson, let them swim again. This is called the "immersion method".
All photos courtesy of Karen Lopes.
You may jump to the newsletter article below the pictures.

[This is the first page of pictures. You may also jump to page two.] 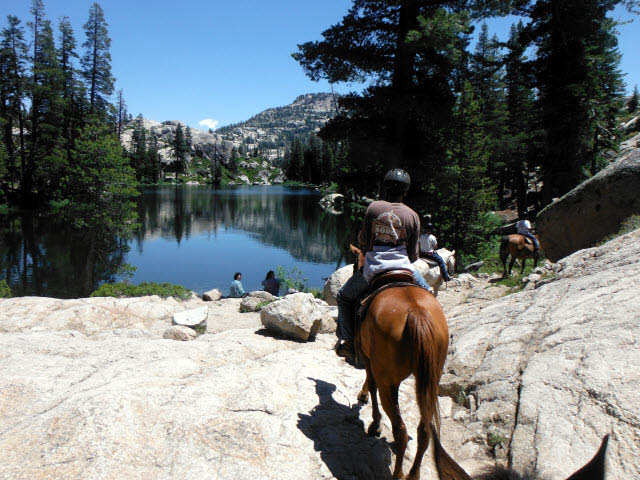 Camp Lake in the Emigrant Wilderness 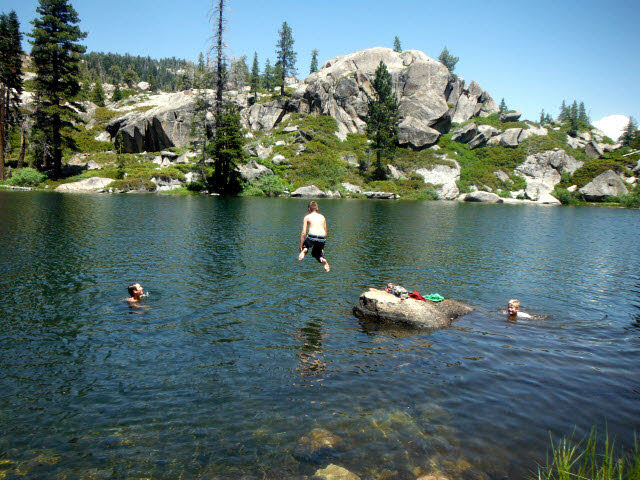 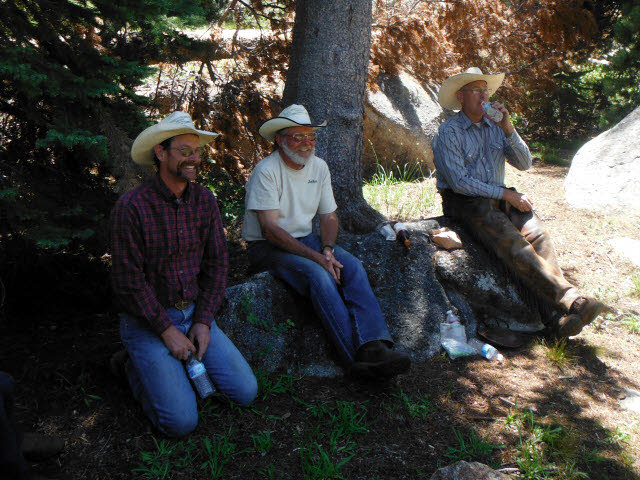 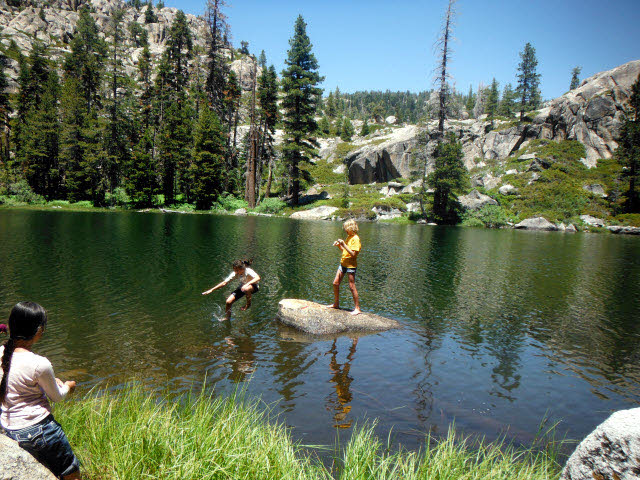 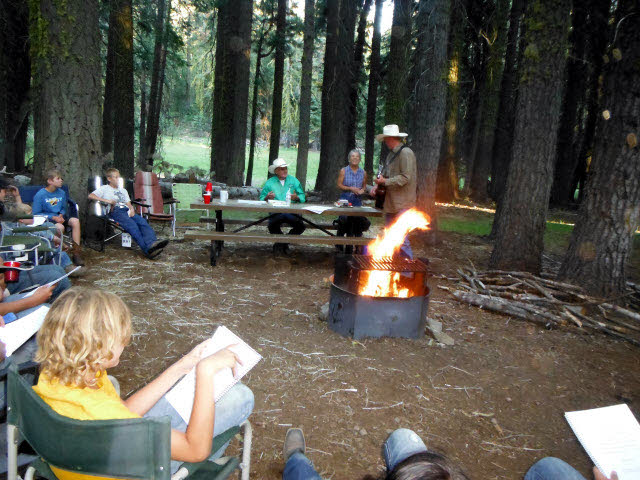 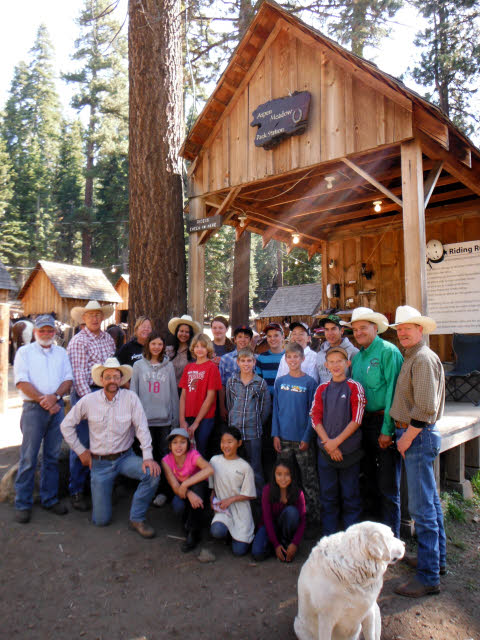 This is the first page of pictures. You may read the newsletter article, below, go to page two, to the main Youth page, or Home.

Dennis Serpa, current president of BCHC, has had a dream for several years: Hold a Youth Horse Camp where we could get our young people out into the wilderness, on stock, and introduce them to the life that we all know and love.

After finding out that BCH of Idaho has been holding a youth camp for several years, Dennis was more motivated than ever to make his dream a reality. With help from their coordinator, and a strong group of volunteers from the Mid Valley BCHC, Dennis got his idea up and running. After the first meeting or two, the committee thought the best and safest route would be to have the participants ride pack station horses.

Dennis contacted Josh Bloom, of Aspen Meadows Pack Station, and he agreed to work with us. The camp would be held at Kerrick Corrals, located in the Stanislaus National Forest, just off of Highway 108 in the Pinecrest area of the Sierra Nevada's. Using Idaho's forms as a guideline; we created an introductory letter and application, camp supply lists, liability and release forms, health information forms, a schedule and even a menu for the weekend campout.

The dates of the event were June 28-30, and participants were busy the entire time! Friday morning parents dropped off their kids and Doug got us started with an Ice-Breaker activity where the kids had to guess the name of the item taped on their back on a paper. They could just ask others "yes" or "no" questions, and had to use the answers to figure out if they had "mule", "campfire", or "wilderness" on their backs! This got the participants talking to each other and interacting in a positive manner.

Participants were then given their tee shirts, with their name, and "BCHC Mid Valley Youth Horse Camp" and our logo on the back. After some information about camp logistics and manners, we were ready to set up tents! After a great lunch, Valerie and John gave a Horse Safety talk to prepare the kids for our first ride, and then we all headed over to the pack station.

The committee members were riding their own mounts, and we broke up into two groups to keep them a manageable size. The pack station wranglers led the two groups of kids out with the adults in tow.

We had a nice two hour ride that led us around Bell Meadows and up to the Dodge Ridge Ski area. We even rode directly underneath one of the ski lifts! We had a very pleasant ride and returned to the pack station safe and sound.

When we returned to camp, we had our Stanislaus National Forest District Ranger, Molly Fuller join us for a brief welcome and history of Wilderness. After a great dinner of hamburgers with all the fixings', Karen presented several of the Leave No Trace principles to the participants.

Nurse Jackie was busy with a few blisters from ill-fitting boots, and a bit of a fever from one participant. After this, Larry brought out his guitar and songbooks, and the kids joined in for some campfire songs, stories, and Smores! The kids retired to their assigned tents and called it a "Great First Day!"

The next morning we were up and running bright and early. Vicki and Tina served up a hearty breakfast of pancakes, bacon, eggs and fruit about 7:00 a.m. Afterwards Dave gave the remainder of the LNT principles to the group, and then the kids were divided into two groups for pack saddle information.

Dave and Dennis each took half of the participants and went over how to properly fit a pack saddle, how to pack and balance your loads, and then they demonstrated how to tie the loads on with a box hitch. The kids had made sandwiches and packed their lunches into ice chests that they then saw loaded onto the mule for the day's excursion into the Emigrant Wilderness.

We then headed over to the pack station, got the kids all mounted up, and again took off in two separate groups with the Wrangler in the lead, and the committee members bringing up the rear. We rode along the Ridge Trail, and to Crabtree Trailhead, and then headed up the mountain to Camp Lake, which is located just inside the Wilderness Boundary. The group saw some spectacular views from the trail, and we were able to see the boundary of Yosemite National Park, which is located south of the Emigrant Wilderness.

We arrived at Camp Lake, and it didn't take long before the boys were in the water! There was a perfect rock that they used as their spring board, and it wasn't long before the girls decided they wanted to be in the lake as well! We had our lunches and enjoyed a wonderful afternoon at this beautiful lake. With many of the kids in soaked jeans, we all got mounted and headed back to the pack station.

We saw many hikers along the trail, and were excited to see how many young kids were on the trail with their families. This was the weekend for the youth! Once back to camp, Dave gave a quick demonstration of how to put up a highline, and then the kids were able to have a little "free" time before dinner.

The kids did have to help with dinner that night, as they were able to "top" their own Dutch Oven pizza! This went over really well, as there were a variety of toppings for the kids to choose from, and the pizzas were delicious! Saturday night was the "Kowboy Kazoo" contest, and so after some campfire songs, Larry passed out the Kazoos and the participants each gave their solo attempt at bringing home the title.

The judges had a tough time, but eventually the winner rose to the top, and our youngest participant took home the trophy! Just when the adults thought we might have had the kids tired out, they got their second wind and were having another fun evening! They made it to their tents later in the night, and we all slept like babies after all of the fun and excitement of the day!

Sunday morning we awoke and were again treated to a wonderful meal, this time breakfast burritos with all the fixings.

After breakfast the kids packed up their gear, took down the tents, and then we headed over to Aspen Meadows Pack Station one more time. We met Josh and his crew there, and begin helping with clean-up. Kids raked up straw and manure, swept out tack rooms and porches, picked up trash, and helped in any way needed.

We said our "Thank-Yous" and "Good-Byes" to Josh, and headed back to our camp for our final clean-up. After this we all gathered around the camp and had our wrap up meeting. Committee members presented the kids with various questions, such as what was your favorite memory, and what would you like to see different? The feedback was very positive, and everyone, adults and youths alike, had a very fun, educational, and rewarding weekend.

Mid Valley BCHC Committee members: Dennis Serpa, Dave Moser, Doug and Cathy Dollarhide, Karen Lopes, Vicki Whistler, Jackie Williams, Valerie Perry, John Marshall, Tina McLaughlin, and Larry Wood. Many thanks to Josh Bloom of Aspen Meadows Pack Station for his support and donations, Terri Arrington for her generous contributions to help fund this project, and also to the Tee-Shirt Embroidery for the beautiful shirts that they made for our participants.

This is the first page of pictures. You may go to page two, to the main Youth page, or Home.