We had a general meeting at Kennedy Meadows August 31 - September 5, 2012. A little business, a little education, lots of food and riding.
All photos courtesy of Kathy Zumbrunn.
You may jump to the newsletter article below the pictures.

[This is the first page of pictures. You may also jump to page two.] 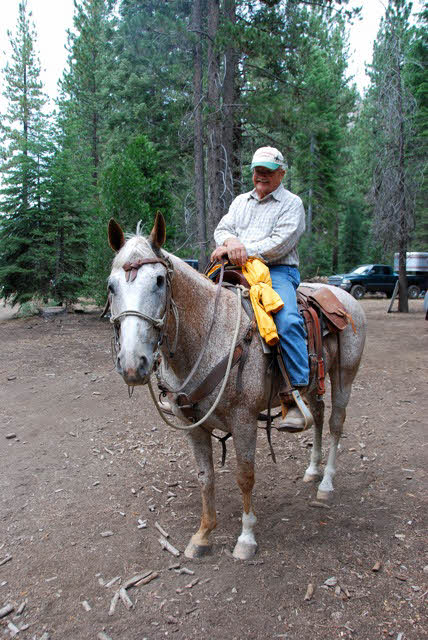 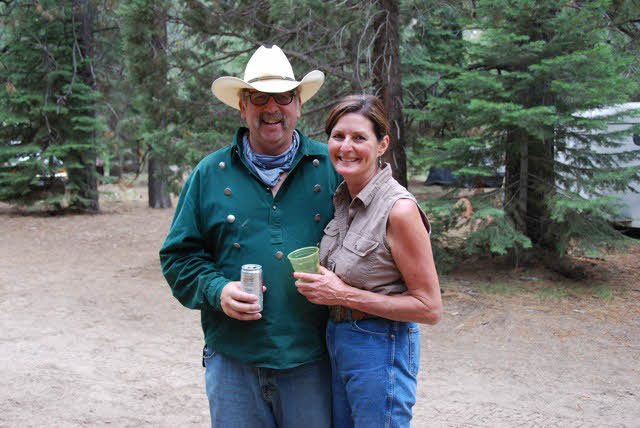 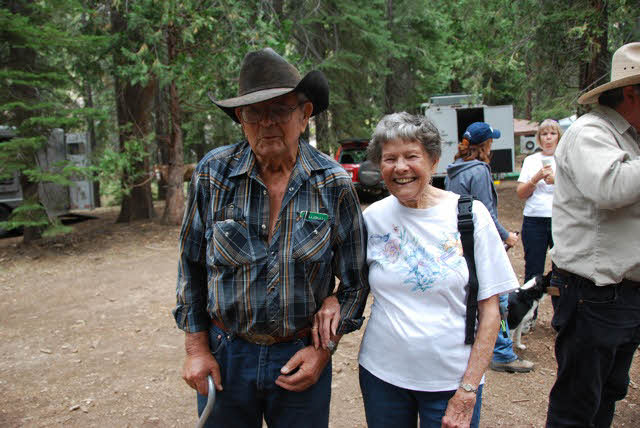 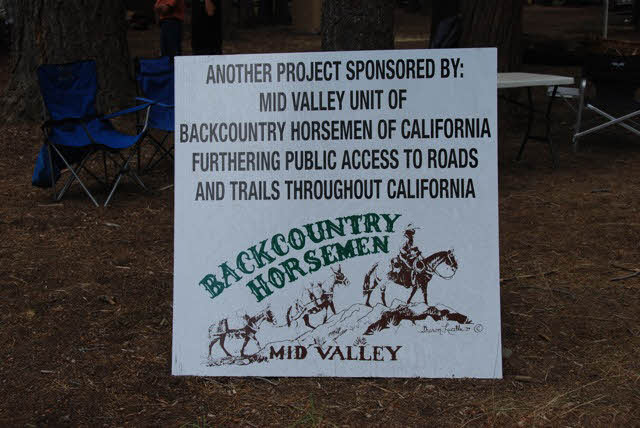 A poster so people know who to thank. 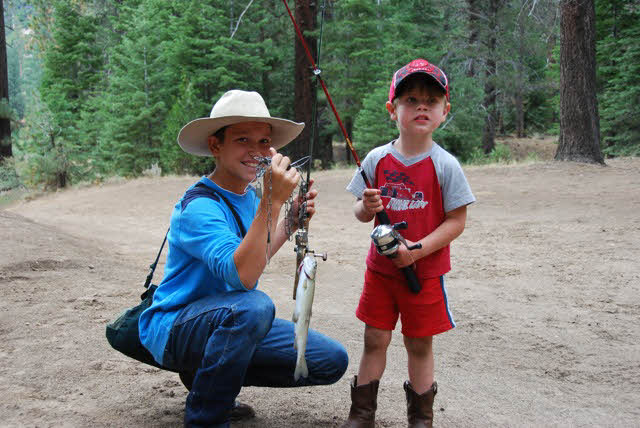 Happy children with the catch of the day! 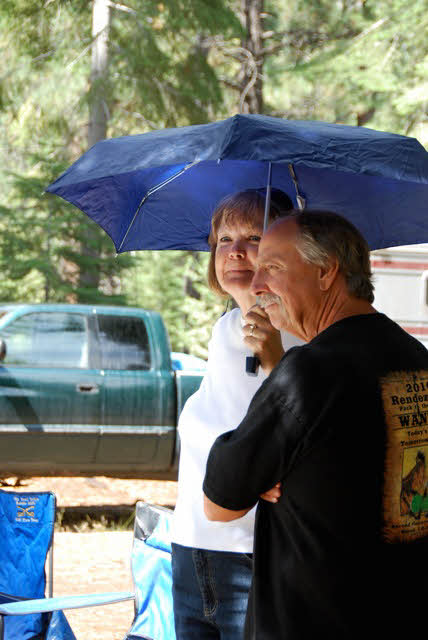 Carol Jo and Larry Schneider waiting out the storm! 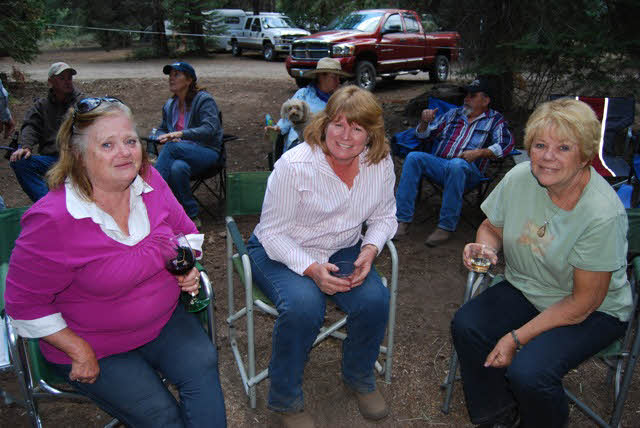 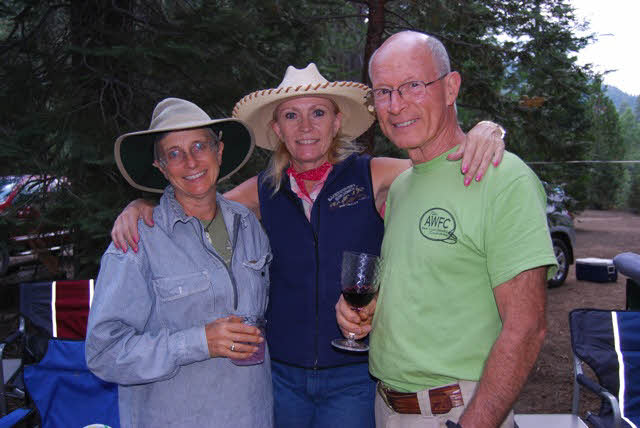 This is the first page of pictures. You may read the newsletter article, below, go to page two, to the main Activities page, or Home.

Pulling into Kennedy Meadows brought back some great memories. There is a great trailhead before dropping into the resort area. It is easy to get to, has a paved parking lot, tables and hitching rails. Because of the generosity of the owner, Matt Bloom, a Mid Valley Unit member, we were allowed to camp in the lower meadow next to the stream and under the trees. Friday around noon as I pulled into the lower meadow, Vicki Whisler and Sandy Kirchner were sitting in the shade, directing traffic and serving as a nice welcoming committee. It was nice to choose from numerous "perfect" camp sites. Each site had plenty of room for our rigs, high lines, corrals, tables, tents, cooking and camping gear.

After setting up camp, we had several choices: Taking a little ride, fishing, and/or sitting around with a cold beverage and socializing. Around dusk, almost like magic, Richard Kirchner had set up his broiler, loaded the table with macaroni and potato salads, had the drinks packed in ice and the hot hotdogs, buns and condiments ready to go. As we all sat around eating and enjoying the beauty of Kennedy Meadows, the slide show began. Pictures of projects dating back several years ago up to this summer's latest work parties were projected on a screen. Thank you, Ernie Warzyca, for your work putting this together. Following the slide show Dennis Serpa treated us to an informative and entertaining CD about the California history of mules.

Many of us made nice plans to sleep in Saturday morning. Oops. Helicopters started flying in supplies for PG and E at dawn. At least we all got an early start! By 10 a.m. several different groups had headed out for their respective destinations. There were several "dude" trails for those who just wanted to take a short easy ride along the river and around the meadow. Other groups headed to Lower Relief Reservoir and to Kennedy Lake.

Rumor has it, upon approaching the second bridge Carlena Kellog's horse decided backing over the steep riverbank (cliff) might work out better than using the bridge. The horse came six inches from the drop off before it decided using the bridge might work out a little better. The group riding to Kennedy Lake had a wonderful and exciting ride.

Dennis Serpa was determined to find the trail from Kennedy Lake to the Pacific Crest Trail. He did. Along the lake was a huge muddy bog to cross. I wasn't there, but as I rode up on the group, their horses were muddy up to their chests and hindquarters.

The Lower Relief group reported great trails and beautiful landscapes. We all returned safe and sound and in time for dinner!!!

Forty-four members gathered for Saturday evening's delicious Dutch oven potluck. The tables bowed under the weight of ovens, bowls, and other containers each holding something scrumptious. The most unusual contribution was possibly Kathy Zumbrunn's "Frog Eye Salad," the making of which she claimed "harmed no frogs"!

After everyone finished eating and settled back into their chairs, Rich Kirchner started off the General Meeting, addressing "Mid Valley- ans" and exhorting all of us to purchase a Lucky Calendar. Everyone's participation in this win-win unit fundraiser would be greatly appreciated. Rich announced an easy and pretty ride he called a "dude loop" for those whose horses would be sore the next day. He explained the upcoming RAC grant funded road resurfacing project at Gianelli and encouraged as many of us as possible to volunteer for traffic control duty, 8/13-8/19.

Unit President, Michael King then welcomed everyone, particularly several new members in attendance, and proudly announced the unit was closing in on 400 members.

Michael introduced Bill and Jeanette O'Neil, long-time BCHC members who joined Mid Valley Unit when Ted Whitaker, the first Mid Valley President, was in office. The O'Neils live in Greeley Hill in a home with solar power and no electricity. Bill worked at Kennedy Meadows in the late 1930s/early 1940s and regaled us with fascinating tales of the area.

Bill said he fished most of the Kennedy Meadows country and rode all of it. His first time to Kennedy Lake was on horseback in 1929 when he was only 18 months old! Bill recalled when Frank Pershing ran the pack station in 1915-16. There was a cook tent and he had five horses that could be rented for 50 cents a day

In Bill's day, each packer had a string of 14 mules, all packed with 200-pound loads. At that time the second bridge out of Kennedy Meadows was a cable swinging bridge. When the tungsten mine on the side of the hill near Huckleberry was producing, mules carried out panniers of ore on sawbuck pack saddles to hoppers waiting on Highway 108 by Sonora. The 16-hand "RH" mules were deaf. They were ex-army mules that had had their eardrums punctured so they wouldn't be afraid of artillery fire. The mules were trained to lay down on the trail so pack strings coming from the opposite direction could walk over them.

Bill told us when the dam was constructed equipment was brought by wagon from Sonora then disassembled, packed in on mules, and skidded uphill on sleds with a winch run by a steam donkey. It took 18 mules to bring the refrigerator up to the PG and E cabin! According to Bill, a narrow gauge railroad complete with engine and coal car was left in the bottom of the lake when the dam was filled.

Bill remembers when Kennedy used to be one of the finest fishing areas in California. Huge Rainbow trout, as much as 33 inches long and 12 pounds, came out of there; sometimes as many as four or five a day.

Bill laughingly reported since his future bride could "ride a horse and handle a fly rod" he was going to marry her. Bill and Jeanette have been married 65 years. Our sincere thanks to the O'Neils for sharing their stories with us!

After the General Meeting concluded a few of us who had caught a second wind after a long day of riding, decided to pile into the back of Karen Lopes' pickup and head to the saloon for whiskey, beer and song. We enjoyed an evening of jukebox music, dancing and socializing. All of a sudden thunder, lightning and rain exploded through the night. "Oh, it will blow over," we said. It didn't! A big thank you to Johnny Leal for saving the day. He showed up with his truck and covered camper shell to taxi us back to camp. As several of us arrived at camp we noticed an electric fence strewn all over the place and a couple of horses running wild. Hey, Richard and Katherine, I guess those portable electric fences don't work so well in a lightning storm.

We all survived the wet night. Sunday came and some of us packed up and headed home. Some enjoyed the meadow, went fishing and rode the trails.

It was a great weekend! We really missed those who could not be there. For another really fun and rewarding weekend, consider joining us for the Pine Valley work party organized by Don Butler over Labor Day weekend.

This is the first page of pictures. You may go to page two, to the main Activities page, or Home.