We spent the 4th of July weekend clearing fallen trees off the trails leading out of Pine Valley Horse Camp.
All photos courtesy of Vicki Morales.
You may jump to the newsletter article below the pictures. 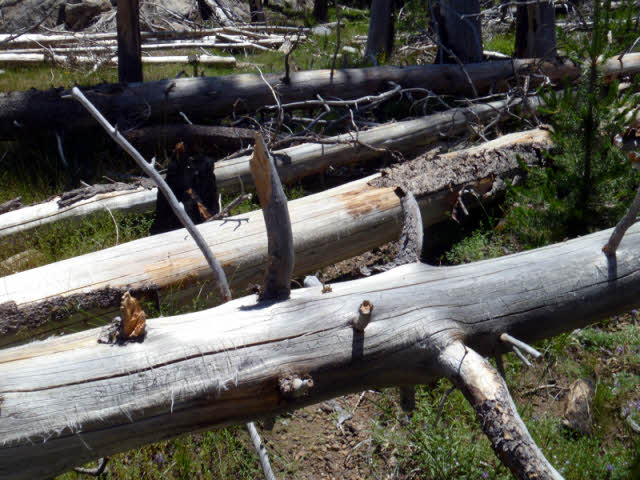 What we were up against 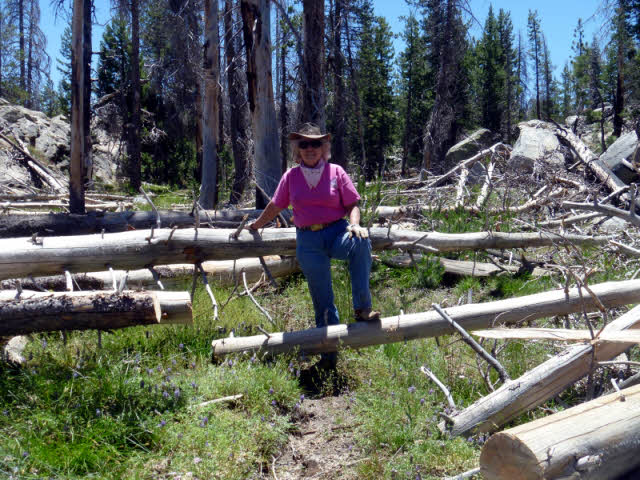 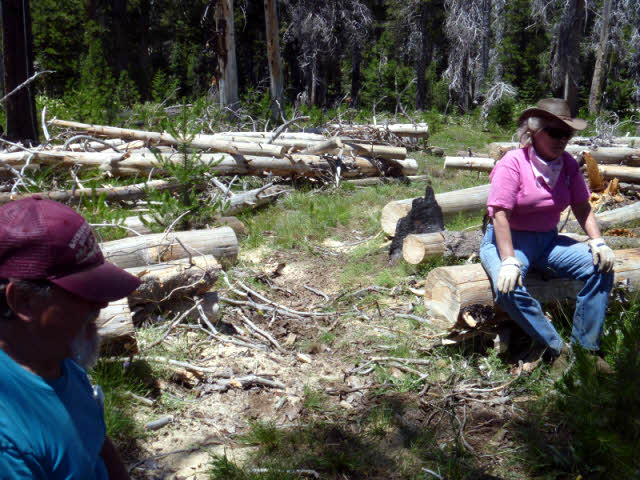 You may read the newsletter article, below, go to the main Activities page, or Home.

The five of us had quite a time. First, we had no tools. Lloyd and Susan Erlandson were going to join us and they were responsible for bringing the tools. Without tools we decided to just take a leisurely ride and look around and see what needed to be done. After all, we understood the Bell Meadow Trail was clear. Then Lloyd showed up, without Susan but with the tools! Lloyd was sorry to say his mother was in the hospital and he and Susan would not be able to join us. How wonderful of Lloyd to drive all the way from Hilmar just to bring us the tools! What a guy!

We loaded up. Don was anxious to try the new clearing saw (which is a super, duper weed eater with a blade that cuts brush up to four inches thick). He had rigged up a special pack to carry it on Big John (John Kidd's mule that Don renamed from D2). Katherine Reeves, Richard Hodgson, Don Butler, and I headed out down the trail from camp. We had barely left when we came to a rather large tree across the path, so we went around it. After all, we were heading out to clear brush. We kept going down the trail and around more trees, all the way to Bell Meadow. Now we were in the clear, we were going to Coffin Hollow. Yeah, right!

By the time we got to the junction to Mud Lake we were off the trail trying to go around more than we were on the trail. We decided to go back and get the chain saws. After lunch we loaded Big John with two chainsaws and loppers and started clearing the trail out of camp all the way to Bell Meadow. Just that was quite a lot of work. When we returned to camp, Johnny Leal had arrived.

The next day Don decided to go another route to get to the brush. We almost decided not to take a chainsaw, but just in case, we took one. Boy, was that a good move! The five of us headed from Mud Lake toward Box Springs. Just past the Lilly Creek crossing we came across a huge pile of eleven trees (Pick-up-Sticks fashion). It probably took us thirty cuts to clear this part of the trail. We continued on, clearing trail and rerouting the trail when the trees were too big for us. Finally we got to a meadow we had cleared for the last two or three years. We could not find the trail. We did find a couple of ribbons tied to downed trees, but we were not able to go around. By then we were tired anyway, so we returned to camp.

You know, we never did get that new clearing saw off John's mule (except at camp)!