Nine of us took a class on chain saw use and safety from the USFS on June 9 - 11, 2012.
All photos courtesy of Ernie Warzyca.
You may jump to the newsletter article below the pictures. 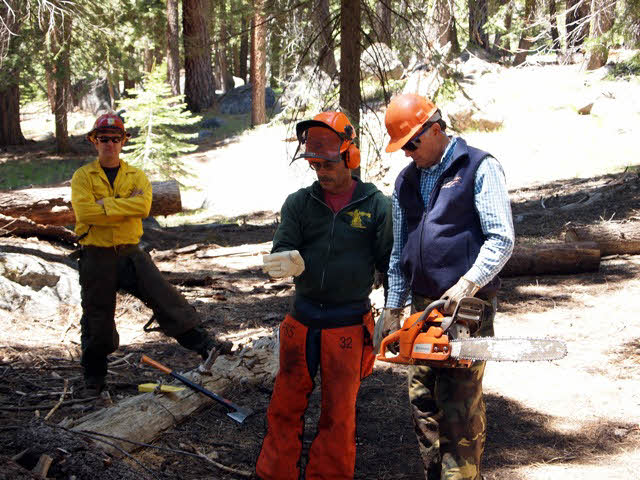 (Guy, Joe Pimentel and Dennis Serpa) I think Guy is getting impatient! 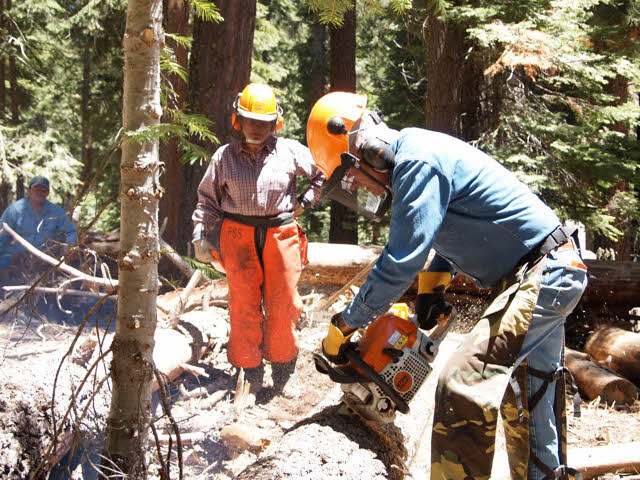 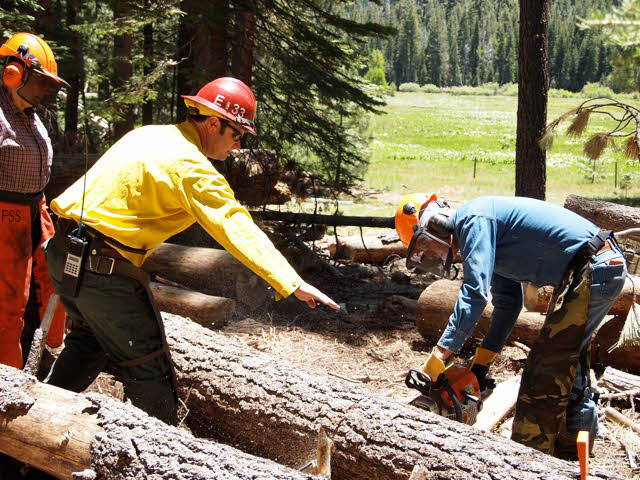 Stop, Don. Leave one for Vicki! 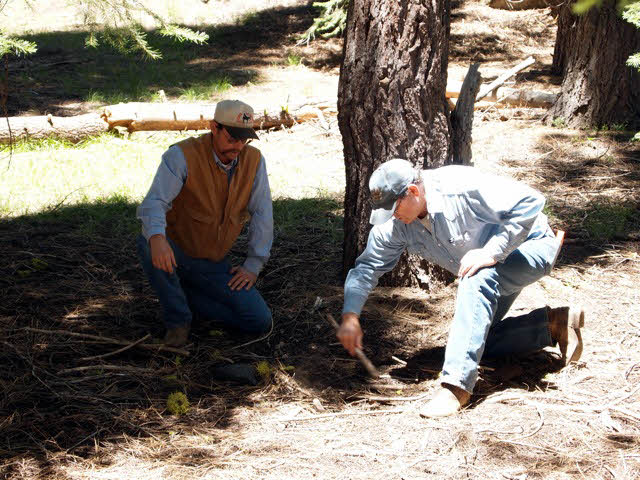 Okay Doug. You distract them and I'll circle around back! 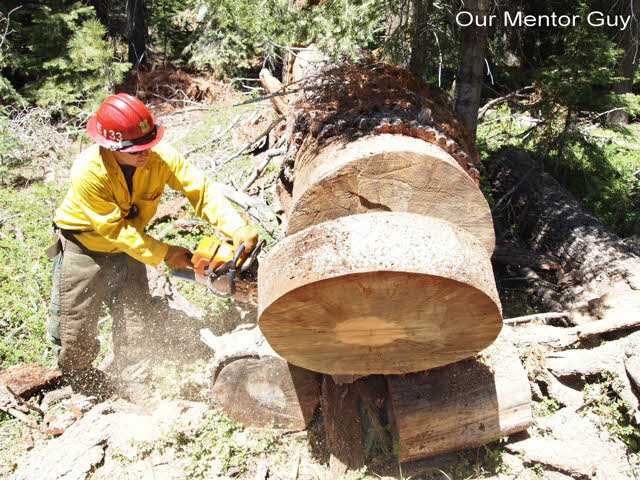 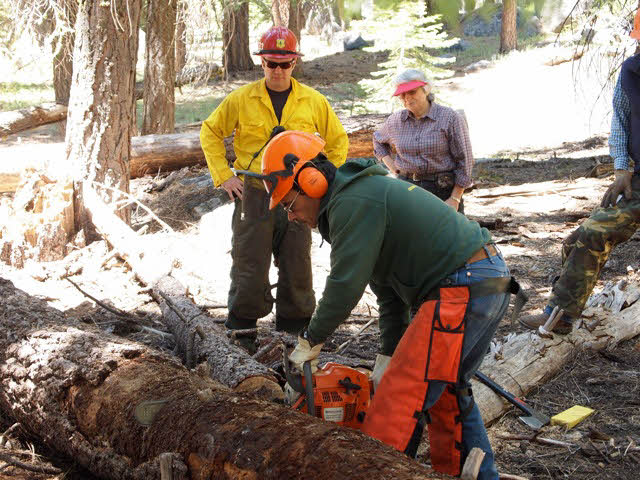 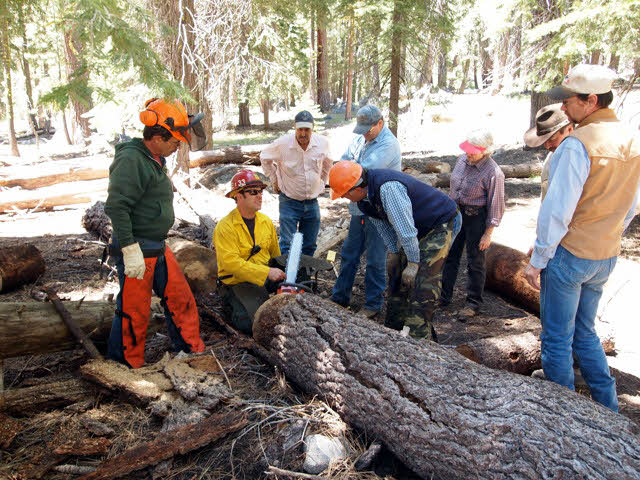 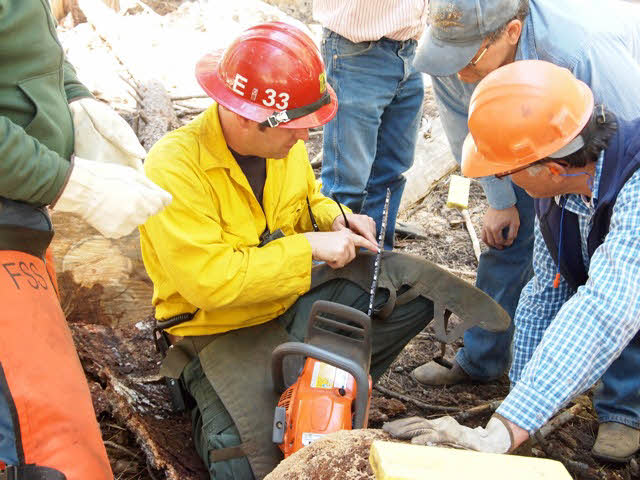 Okay fellas. These are sharp. Keep your fingers away! 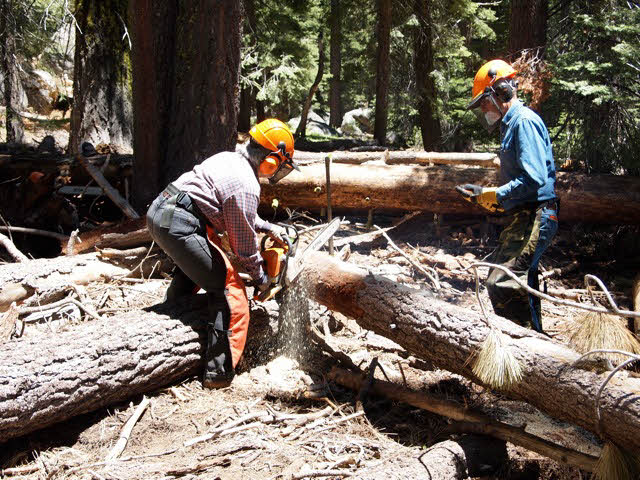 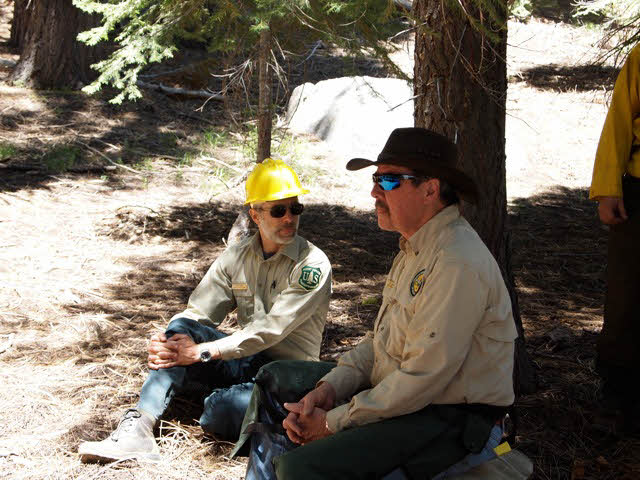 These BCH guys are making us look bad!

You may now read the newsletter article, below, go to the main Activities page, or Home.

On the weekend of June 9 through 11, nine of us from Mid Valley Unit BCH and three from the Stanislaus Wilderness Volunteers came to the training class at the Pine Crest Ranger Station. Don Butler, Vicki Morales and I came up on Friday and camped at Pine Valley Horse Camp. Don was under the impression that our whole group was going to meet and camp there. It got down to 38 degrees both nights but the days were beautiful.

The first day was classroom training all day using the Cal-Fire training manual which is about 3/4 inches thick. Fortunately we didn't have to go through the whole book as it's also the training manual for the "C" Fallers Classification.

Our trainer's name was "Guy" (I don't remember his whole name), his parents gave him this nickname as a little kid; something about "Where's the little guy" and it stuck, so that is what we called him). We all liked him and he us, so training went very well, was very informative and fun, too.

At the end of the first day, Don, Vicki and I went back to Pine Valley Horse Camp and everyone else, except Mary Beth Baglione, went to Carl Perry's house because it is only a half hour down the road. The next morning was Sawyer's training day. Mary Beth never made it, something personal came up. We left for Bell Meadow where Guy had pre-sited a real tangle of blow down trees with all types of log situations for us to cut mock trails through. We had to assess the safety of the area, remove the hazards or work around them, and make our cuts, observing every safety measure and explaining them out loud. We worked in teams of two and we all did great. Vicki was very nervous, but she made us proud!

Dan got reprimanded from Guy for doing the "Fonz" as he called it, so we now have a new name for Dan: "The Fonz". Seriously though, all went great and we all passed with a "B" certification.

We got a real treat from Guy. He showed us his technique for cutting a three-foot log with a two-foot chainsaw using a "five point cut" method that was cool. Then he showed us another cool trick. There was a 100-foot tree leaning on another tree twenty feet away. As it turned out, the leaner was rotten on the inside and Guy's technique had to be modified in the process, which added to an already dangerous situation. It took two attempts to fell it. The first cut allowed the tree to come off the stump, but the tangle 100 feet up wouldn't let it come down. So a second cut had to be made, increasing the danger. When he did the second cut it came down in a very spectacular way, with the top breaking off a 6 inch by 10 foot log appropriately named "The Widow Maker". Fortunately, everyone was safe!

All in all it was a great class. I think we all are glad we took it and lucky to have gotten Guy as our instructor.